Not to be confused with Dua Lipa (Singer).

Dua Lipa is the debut studio album by English singer Dua Lipa. It was released on 2 June 2017 by Warner Bros. Records. The lyrical themes revolve around her personal views of love, rising above, sex, and self-empowerment.

The album has spawned eight singles, including the UK top 40 singles "Be the One", "Hotter Than Hell", "Blow Your Mind (Mwah)", "IDGAF" and "New Rules", with the last becoming Lipa's first number-one single in the UK. "New Rules" also reached the top 10 in the United States, peaking at number six. The album received positive reviews from music critics.

A super deluxe edition of the album, titled the Complete Edition, was released on 19 October 2018. It features three brand-new songs and past collaborations Lipa has been featured on, including Calvin Harris's UK number-one single "One Kiss" and Martin Garrix's single "Scared to Be Lonely". Lipa promoted the album in various TV performances, award shows and also by two concert tours, the most successful being the Self-Titled Tour.

Lipa relocated from her parents' Kosovo back to England at the age of 15, with the intent to pursue music as a career. Without family, she took up residence in Camden Town, and shared a flat with a friend, re-enrolling at the prestigious Sylvia Young Theatre School part-time. Lipa networked as she hostessed at nightclubs and began modeling; she starred in a 2013 X Factor commercial that brought wider exposure.[1]

Upon completing her studies at Parliament Hill School, Lipa decided to take a gap year and resolved to find a music manager—which came to fruition as her demos caught the attention of Ben Mawson and she inked a major-label deal with Warner Bros. Records before the year was through. Work on her debut album began immediately in 2015 as Mawson arranged sessions with a string of collaborators, and Lipa seeking a sound marrying that of J. Cole and Nelly Furtado. Work continued throughout 2016 as Lipa traveled to promote released music in the United States. Lipa describes the album as "dark pop".

Commenting on the album's direction, Lipa said "When I had taken interest with my own music, I would listen to Nelly Furtado, P!nk and Destiny's Child, but as I grew older I found my love for hip hop, so the main thing I listen to are rap..., I love the realness behind it, that's why I try to also bind that into the music". "This album has a mixture of that and a heavy influence with hip hop. where I like to sing the rap, so I start my verses that are very fast paced then you hear a pop chorus".

During an interview with the Official Charts Company in June 2017, Lipa said, "I've been working a lot, writing some more, finishing off the album... it's been really crazy – I've been working with some amazing people. A couple of things have happened where I've had to stop and pinch myself."She also confirmed that she was working with MNEK in the studio.

The album was originally scheduled to be released on 30 September 2016, but it was eventually pushed back to 10 February 2017. On 11 January 2017, Lipa announced via Twitter that the album's release had been delayed again until 2 June, as she wanted to include "new songs and exciting collaborations". The song "Blow Your Mind (Mwah)" was released to iTunes on 26 August 2016, along with the reveal of the album artwork and pre-order.

In April 2017, a series of animated collages for each track on the album was produced by artist Joe Webb.

Commenting on the album title and cover, Lipa said, "I'm so excited to share my album artwork with you and thank you all for being so patient and supportive. The reason it is self-titled is because this album is me. It's a pure representation of who I am as a person and as an artist". The standard album cover has been described as "minimal yet smoldering", featuring Lipa in a scaly jacket and she stares longingly into the camera with wet hair covering one side of her face with shades of purple and blue. The deluxe album cover features the same picture of Lipa, just with the difference in the shades, now being pink and green, while the Complete Edition features the same picture with glitter added to the background. 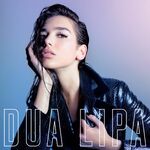 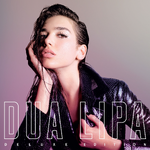 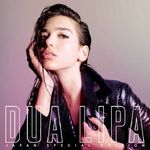 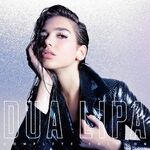 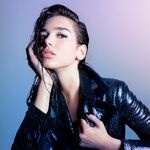 "New Love" was released as the album's first single on 21 August 2015. A music video directed by Nicole Nodland for the song was released.[2]

"Be The One" was released as the first proper single from the album on 30 October 2015. It was met with widespread commercial success, being certified platinum the UK, Australia, Belgium and Italy, and gold in Germany, and reached number nine on the UK Singles Chart.

"Last Dance" was released as the album's second single on 9 February 2016.

"Hotter Than Hell" was released as the third single on 6 May 2016. The song peaked at number 15 in United Kingdom and reached the top 20 in several markets.

"Blow Your Mind (Mwah)" was released as the fourth single on 26 August 2016, giving Lipa her second UK top 40 single at the time.

The album's fifth single, "Lost In Your Light", was released on 21 April 2017 and features Miguel.

"New Rules" was released as the sixth single from the album on 7 July 2017, and has reached number one on the UK Singles Chart, becoming Lipa's first number-one single on the chart.[20]

On 1 December 2017, "Homesick" was released as a digital single and later the same month for airplay in Belgium and the Netherlands.

On 16 November 2017, it was confirmed that "IDGAF" would serve as the album's eighth single.[3] It was serviced to contemporary hit radio in the United Kingdom on 12 January 2018. The song peaked at number 3 in United Kingdom and reached the top 10 in several markets.

On 28 October 2016, the first promotional single "Room For 2" was released. An accompanying music video was released a week later on Hunger TV's YouTube channel.[28]

A studio version of "Thinking 'Bout You", a previous demo song recorded by Lipa, was released as the second promotional single on 6 January 2017.

"Lost In Your Light (feat. Miguel)"

Various
"Dua Lipa: Complete Edition" is a "super deluxe" re-release of her first album, Dua Lipa. It was first announced in a tweet on September 4, 2018. The album will contain all songs from her debut self-titled album Dua Lipa and the era’s notable collaborations. Complete Edition will debut the new tracks "Kiss and Make Up", "Want To", and "Running".

Credits adapted from the liner notes of the deluxe edition of Dua Lipa.

Community content is available under CC-BY-SA unless otherwise noted.
Advertisement