Future Nostalgia is the second studio album by Dua Lipa.[1], released on 27 March 2020 by Warner Records. Lipa enlisted writers and producers such as Jeff Bhasker, Ian Kirkpatrick, Stuart Price, The Monsters & Strangerz, in order to create a "nostalgic" pop and disco record with influences from dance-pop and electronic music, inspired by artists such as Madonna, Gwen Stefani, Moloko, Blondie and Outkast.

The album was preceded by three singles and the title track, which was released as a promotional single. Don’t Start Now" was released on 31 October 2019, as the album's lead single, attaining both critical and commercial success. The song became her first top three entry on the Billboard Hot 100 chart. "Physical" and "Break My Heart" were released as the second and third singles, respectively, and both reached the top 10 on the UK Singles Chart. The album was originally scheduled to be released on 3 April 2020, but was moved forward after leaking in its entirety two weeks earlier. To promote the album, Lipa is scheduled to embark on the Future Nostalgia Tour, commencing in January 2021.

Upon its release, Future Nostalgia received widespread acclaim from music critics, many of whom praised the production and its cohesiveness. Commercially, the album topped the charts in nine different countries. In the United Kingdom, it peaked atop the UK Albums Chart for four nonconsecutive weeks, becoming her first album to do so; it reached the top spot in Australia, Ireland and New Zealand, and the top five in Belgium, Germany, and the United States.

After the release of Dua Lipa: The Complete Edition in October 2018, the expanded deluxe edition of Lipa's debut album, Lipa announced a new single titled "Swan Song". On 24 January 2019, the song was released for the film Alita: Battle Angel (2019), and was met with moderate commercial success. In the same month, Lipa stated that she had been spending the past year in the writing process for an upcoming second studio album.[2] Whilst discussing the sound of the album, Lipa commented that it would be a "nostalgic" pop record that "feels like a dancercise class".[3] On the development of Future Nostalgia, Lipa stated:

"What I wanted to do with this album was to break out of my comfort zone and challenge myself to make music that felt like it could sit alongside some of my favourite classic pop songs, whilst still feeling fresh and uniquely mine. [...] My sound has naturally matured a bit as I’ve grown up but I wanted to keep the same pop sensibility as I had on the first record.[4]

Following the release of its lead single "Don't Start Now", Future Nostalgia and its accompanying arena tour was announced in December.[5] Lipa stated that the album was inspired by artists including Madonna, Gwen Stefani, Moloko, Blondie and Outkast. She added that the album would feature "a lot more of a live element" inspired by touring with her band, but "mixed together with modern electronic production".[6]

On 29 January 2020, the singer revealed the album's cover art, along with its release date of 3 April 2020.[7] On 23 March, an earlier release date of 27 March 2020 was announced by Lipa, who expressed her concern about releasing music during the COVID-19 pandemic.[8] The announcement also came following a leak of the album.[9]

Lipa began recording for an album project in January 2018, after the conclusion of the first leg of her Self-Titled Tour.[10] In the early days of the album's recording, Lipa worked with producers such as Max Martin[11] and Mark Ronson[12] as well as working at Geejam Studios in Jamaica.[13] After working on the album for nearly a year, Lipa came up with a new album title, Future Nostalgia, while on the way to a radio show in Las Vegas around the time of the 2018 American Music Awards.[14][15] After figuring out the title, Lipa worked backwards from there, figuring out the sound and lyrical content she desired.[16]"Levitating" was recorded shortly thereafter, which was the first track recorded that appears on the album's final track listing.[17][18]

When asked about the direction of her sophomore album, Future Nostalgia, British singer-songwriter Dua Lipa said:

Much aligned with Dua’s concept of the album, the official cover art for Future Nostalgia shot by Hugo Comte — who has also served as the photographer and creative director for the era’s photoshoot — sees Dua sitting in a retrofuturistic car in a pink front-tie crop top while she confidently shows off her two-toned ombré bleached blonde lob she previously debuted in the cover for her November 2019 lead single, “Don’t Start Now.” A blue moon can also be spotted in the background of the cover. Hairstyling was done by Anna Cofone, who has also helped out with the era’s photoshoots.

Back in November 13, 2019, Lipa took to social media to share that she was shooting her album cover. Months later, on January 21, 2020, Dua revealed that the release of the album cover will be pushed back until she gets the pre-order link for the album after telling a fan via Instagram that it will be out in January. In the end, the cover was officially released on January 30, 2020, despite there not being a link for pre-orders. This could be due to the cover and tracklist being allegedly leaked.

The cover art received generally positive reviews from both the general public and fans — with one user on Twitter saying that it reminds them of the 1968 animated television show, Wacky Races‘, Penelope Pitstop. 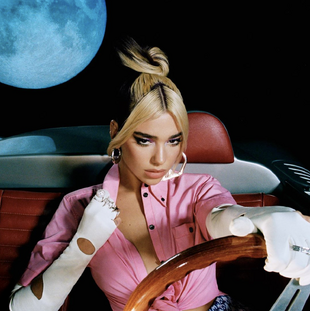 "Don't Start Now" was released on 1 November 2019 as the lead single from the album. It has received positive reviews from critics and was a commercial success, becoming her seventh top 10 entry on the UK Singles Chart and third top 40 entry on the US Billboard Hot 100. "Future Nostalgia", the title track of the album, was released on 13 December 2019 as the first promotional single from the album.[19][20] “Physical“ the Second single from Dua’s album, was released on 31 January 2020. Upon its release, the song was acclaimed by music critics for its catchiness and production. It reached the top 40 in most countries it charted in and number 5 in the UK. "Break My Heart" was released as the third single on 25 March 2020. "Hallucinate" was announced in July 2020 to be released as the album next single, officially impacting contemporary hit radio formats in the United Kingdom on 17 July 2020 as the album's fourth single. Like its predecessor, it received positive reviews for its production, while commercially reaching number 31 on the UK Singles Chart. "Levitating" was serviced to Italian contemporary hit radio formats on 13 August 2020 as the fifth single from Future Nostalgia, along with its remix by The Blessed Madonna which served as the lead single from Club Future Nostalgia. On 1 October 2020 a version of song featuring American rapper DaBaby was released and served as the album's third single in the US. Original version was also made third single of Future Nostalgia in States with its release to adult contemporary radio formats on 19 October 2020.

"Fever" with Belgian singer Angèle was released on 29 October 2020 as a single promoting the French edition of Future Nostalgia.[21][22][23][24] The song peaked at number 79 on the UK Singles Charts, as well as reaching the summit of both the Ultratop Wallonia and Flanders charts of Belgium and reaching number two in France. It additionally entered the top 10 of charts in Hungary and Switzerland. The song received a music video on 6 November 2020 that was directed by We are from L.A.,[25][26] and features Lipa and Angèle exploring the streets of London.[27][28] The two promoted the single with a performance at the 2020 NRJ Music Awards.[29][30]

Credits adapted from the liner notes of Future Nostalgia: The Moonlight Edition.[38]

Community content is available under CC-BY-SA unless otherwise noted.
Advertisement